Esporão has just launched the book Colheitas e Artistas 1985-2015 (Harvests & Artists 1985-2015), presenting 30 harvests, 32 artists and 90 original works that illustrate labels from the Esporão collection. Along with the book launch, Esporão is also presenting the temporary exhibit with the same name – Colheitas e Artistas 1985-2015 – which will take place from 30 January to 4 February at the Ler Devagar bookstore, in Lisbon’s LX Factory.

Since its first wine from 1985, Esporão has maintained the tradition of enriching and personalising each harvest’s labels, combining the universal wine culture and art. Until 2015, Esporão had the privilege of tapping into the talent and generosity of 29 Portuguese, 1 Brazilian and 2 Angolan artists. Esporão’s book “Colheitas e Artistas 1985 – 2015” results from a unique compilation of the harvests and their historical framework, the original works that illustrate the labels and the artists who built the Esporão collection. This is a way to secure this heritage in the present and create a memory for the future.

The tradition has remained, and this group of 32 artists was followed by Duarte Belo.
A new collaboration will be announced this year.

The book is available at the Ler Devagar and Ferin bookstores, in Lisbon; the Livraria do Mercado bookstore, in Óbidos, as well as at Herdade do Esporão’s Wine Tourism shop, at a Recommended Retail Price of €50. 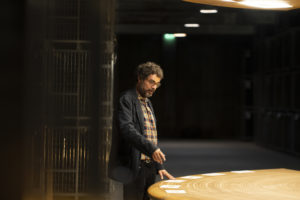 The stories of a label: Jorge Queiroz Projecting art into another dimension