In this episode of A Comida Portuguesa a Gostar Dela Própria (Portuguese Food Likes Itself), we visit Aldeia de Sete, the home of musician and singer-songwriter, Pedro Mestre, chief guardian of the viola campaniça instrument. We’re going to cook tubers, fungi that grow in the Mediterranean climate (Terfezia spp.) and thrive underground on a large strip of the Portuguese mainland. To clarify any lingering doubts, let us start by saying, There are no truffles in Portugal. The generic and morphological similarity between tubers and some Tuber truffles leads to various types of speculation, and the generally well-intentioned desire to appreciate “what is ours” often nourishes much myth and confusion.

The truth is that, despite great geological variety and countless micro-climates, nowhere in Portugal can we find conditions conducive to the spontaneous growth of truffles (soils with high pH levels that facilitate the growth of oak, chestnut or hazelnut trees, whose root systems host the symbiotic mycorrhizal of truffle hyphae). End of discussion. Turning our attention to tubers once more, these underground fungi, of which the most common species in Portugal are Terfezia arenaria and Terfezia leptoderma, are much appreciated (both cooked and raw) by the rural populations where they are found. Depending on the region and cultural context, the names given to them include: Alegria da Santa Luzia, Batata da Terra, Criadilha, Maravilha, Regota, Reigota, Reinota, Renota, Atúbra, Tubara and Tubera.

It is also worth mentioning that when potatoes appeared on the Iberian Peninsula in the first quarter of the 16th century, they were associated with the “criadillas they were similar to”.

Picked by Jacinto Fatana and Senhor Isidro, using a secret “precept”, passed from generation to generation, and which involves detecting the presence of a certain plant in the woods (), the use of a hoe and the occasional help of a clever dog or two, the “atúbras” we found in Aldeia de Sete, belong to the Terfézia leptoderma species. These are more angular in appearance as they grow in rocky soil, with a darker and more streaky interior than Terfézias arenaria, which are larger and rounder, and found in sandy soils. The quality of Senhor Inácio’s free range eggs inspired me to make a túberas de molho amarelo (tubers in yellow sauce), a staple recipe from well-to-do Alentejo houses that is reminiscent of fricassés. Enjoy! 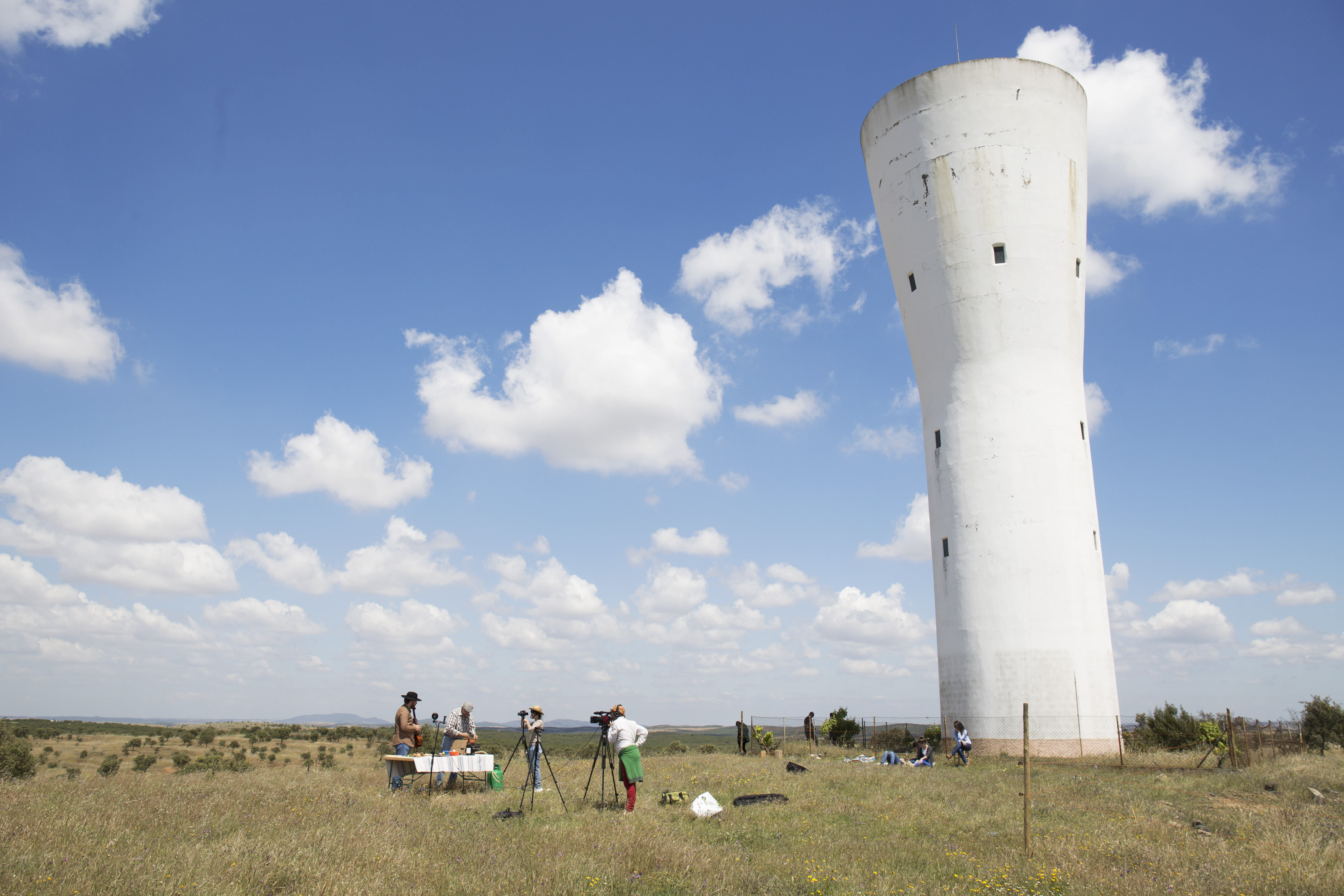 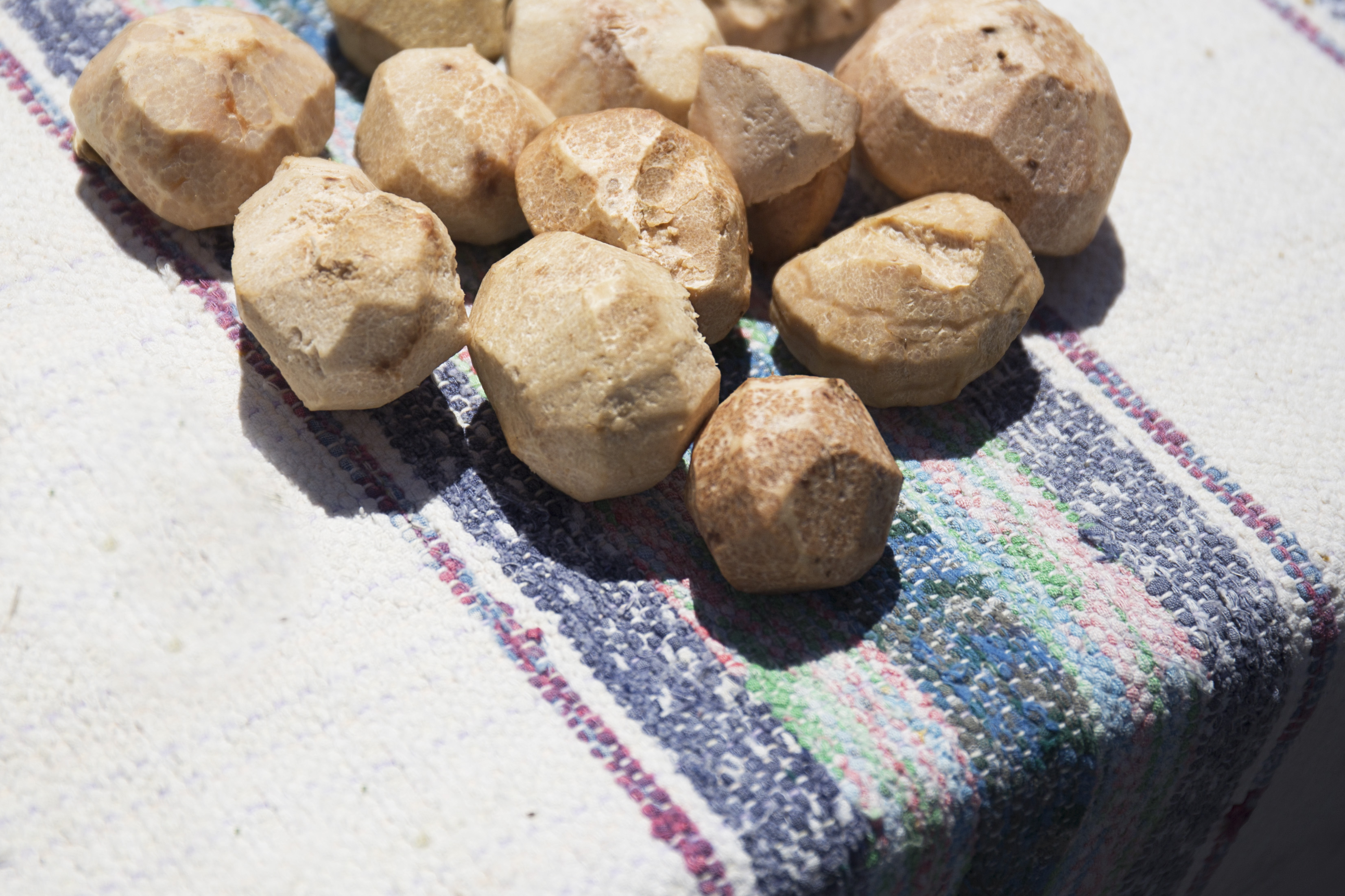 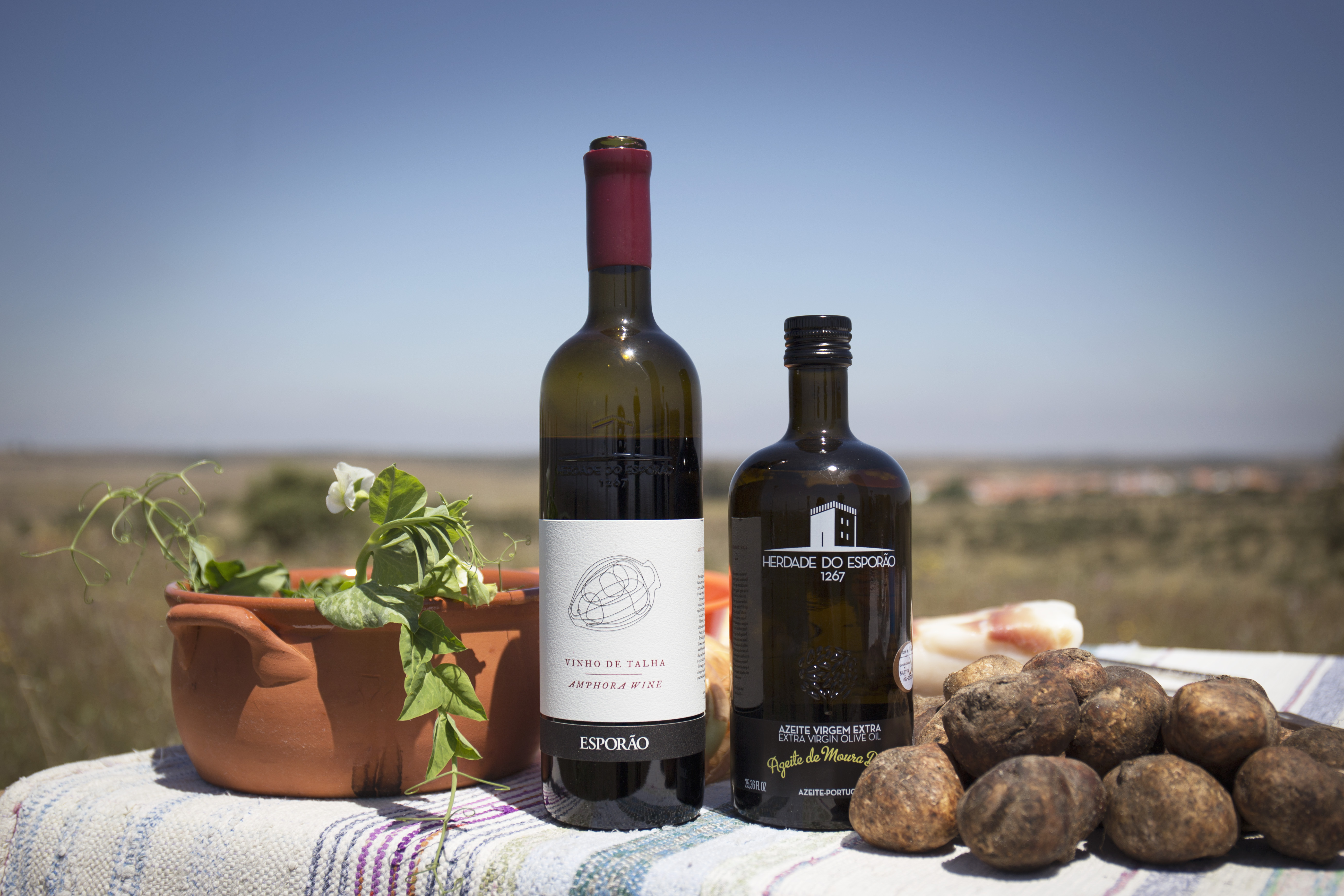 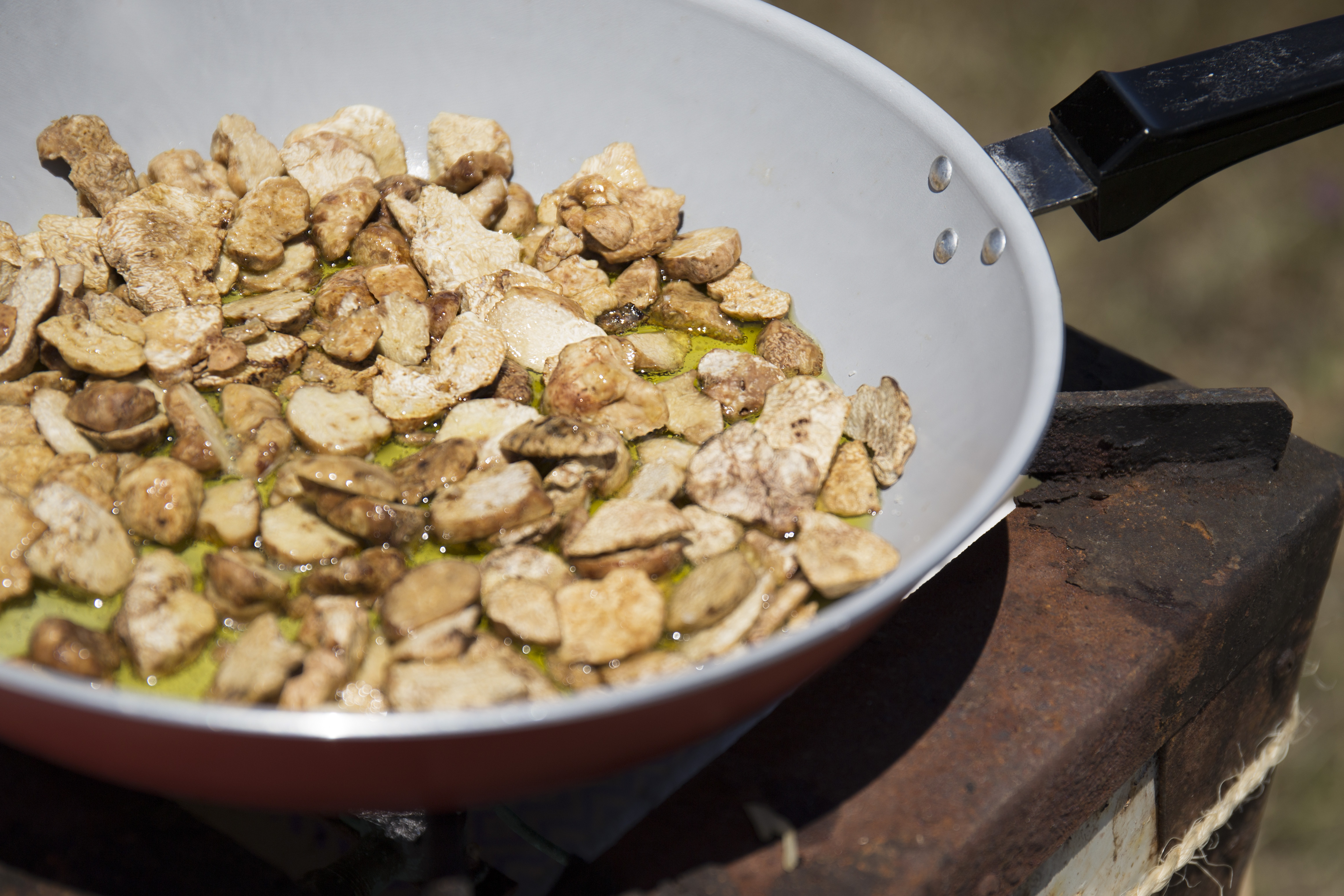 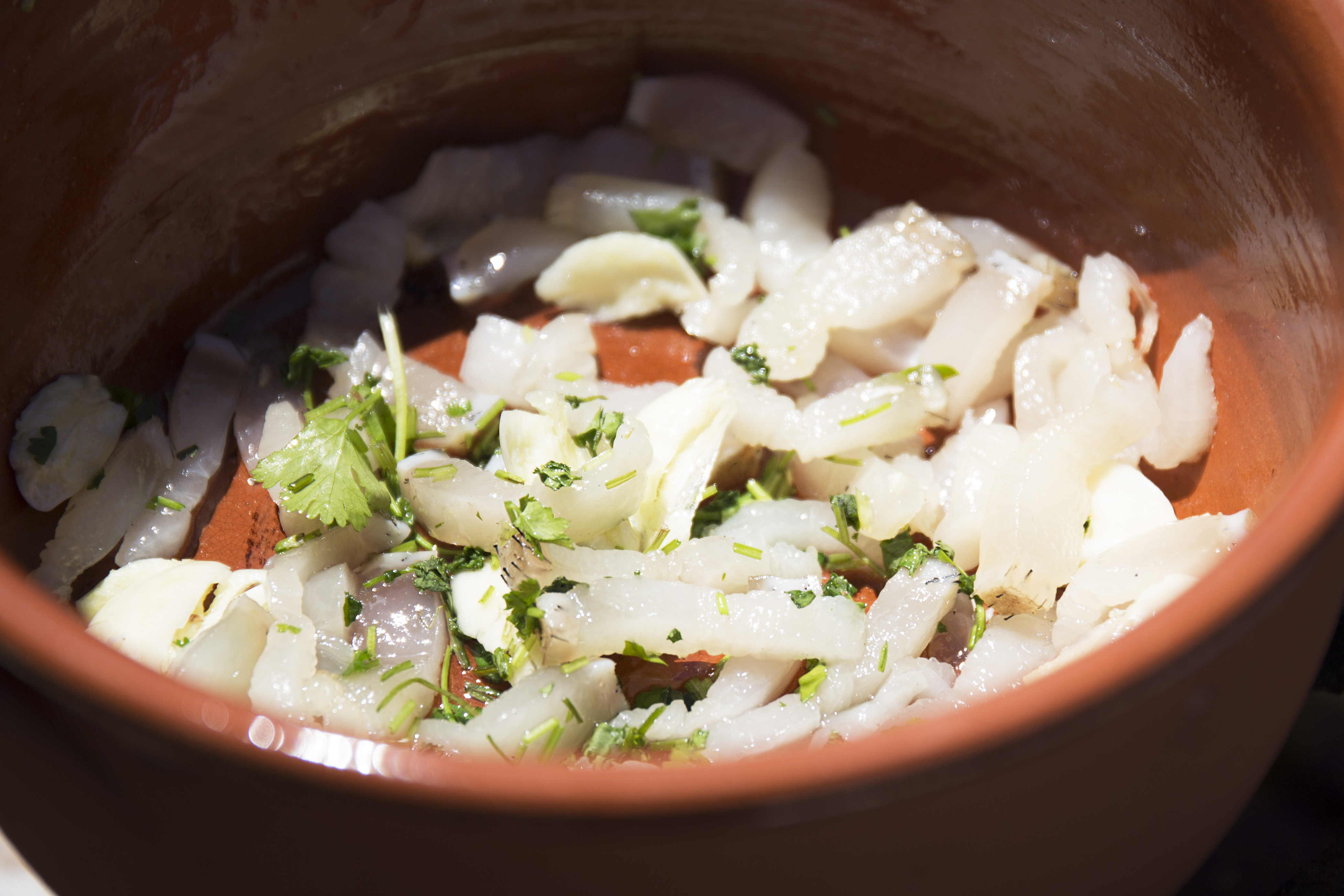 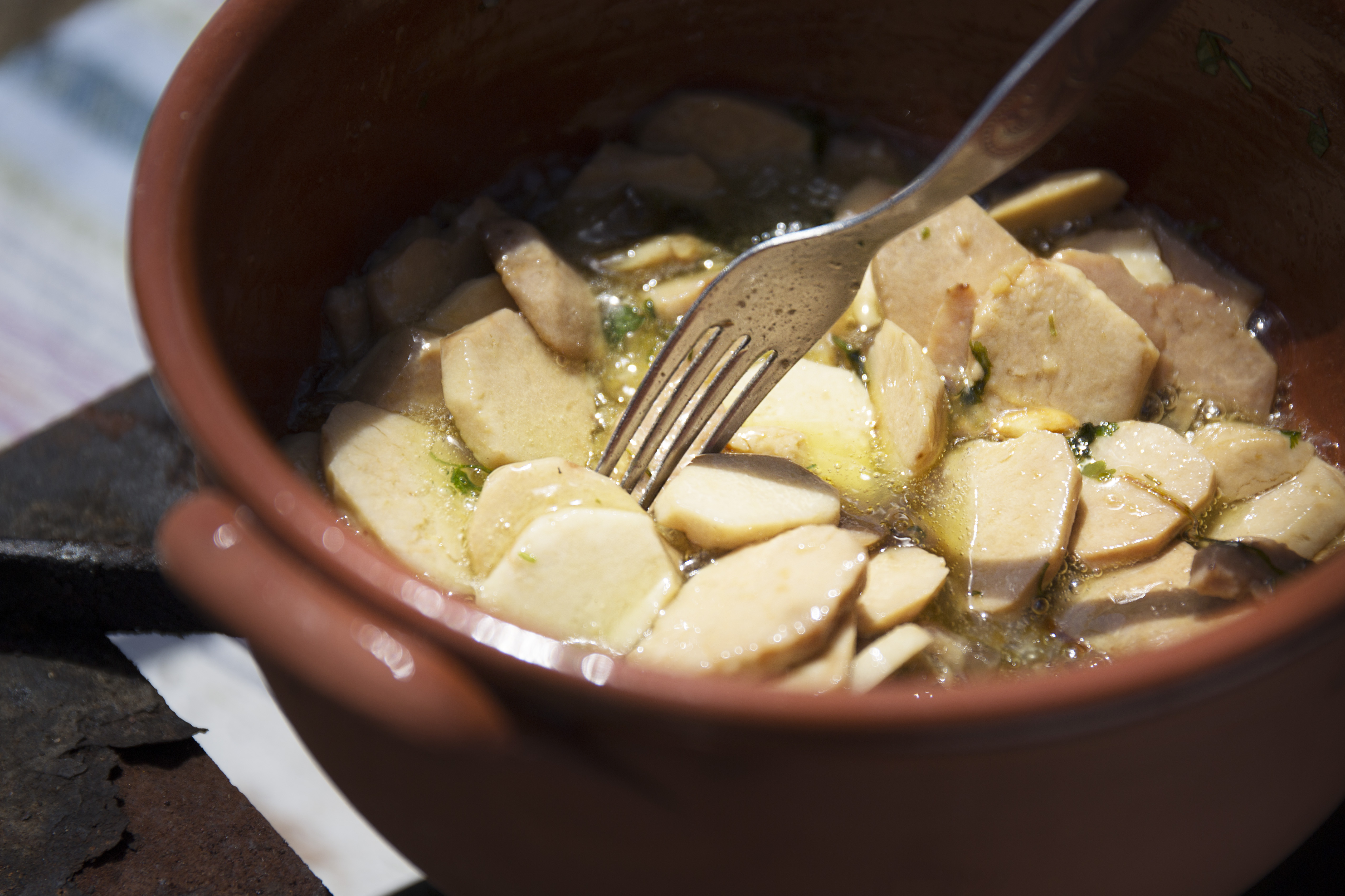 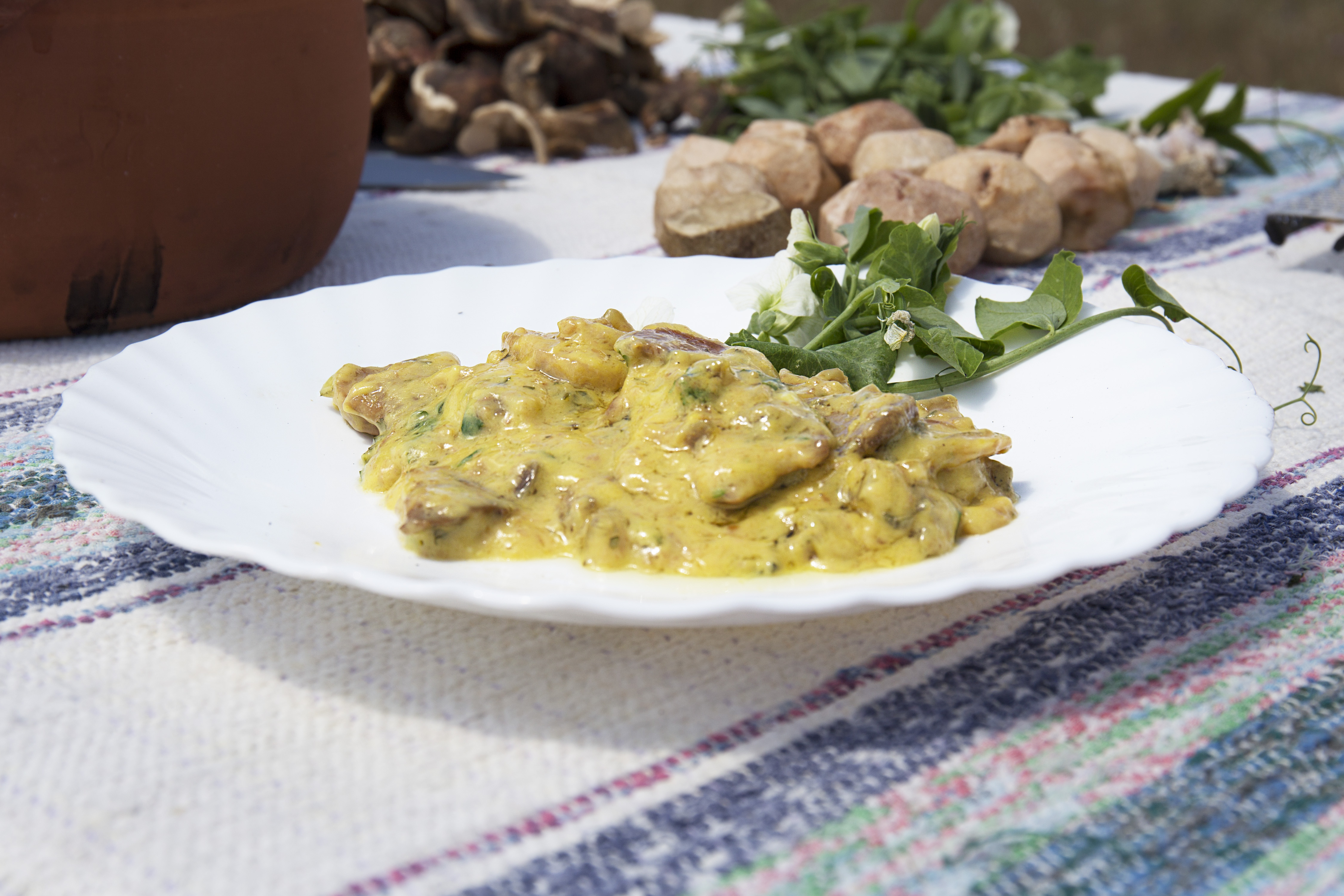 In a clay pot, melt the sliced bacon, stirring with a wooden spoon, until crisp.

Add the garlic, and, immediately aer, the sliced túberas. Stir until the túberas are golden.

Lower the heat and add the lemon zest. Dilute the egg yolks with 2 tablespoons of water and the juice of half a lemon.

Add the mixture to the pot, stirring well, remove from the heat and add a drizzle of olive oil, continuing to stir until the sauce thickens.

Season with salt and pepper, decorate with pea sprouts, and serve. 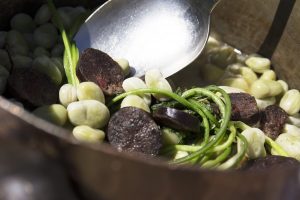 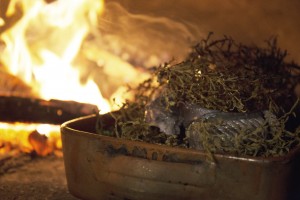 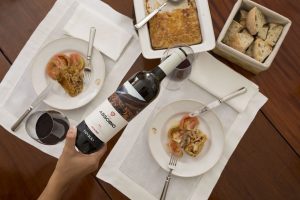 A special pairing for Assobio Red